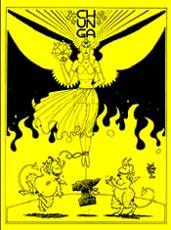 Chunga is available as a PDF on eFanzines.com

In the 1980s, Andy Hopper had co-edited issue 11 of Science Fiction Five Yearly, with Geri Sullivan and Jeff Schalles. He also edited the fan anthology Fanthology '89. In the 1990s, he and Carl Juarez and Carl Juarez co-edited the newszine Apparatchik with Victor Gonzalez, winning the FAAn Award for Best Fanzine for the years 1995 and 1996.

Randy Byers was also one of the Associate Editors of Science Fiction Five Yearly.