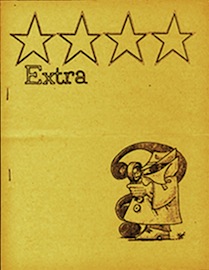 Four Star Extra was a science fiction fanzine by Arnie and Joyce Worley Katz, and Bill and Charlene Kunkel.

Issue 5 was reviewed in Rune 54 of November 1978; "Personalzine, "published with joyous frequency", mimeo. Each of the four participants writes about whatever is of interest or importance to him/her, I guess. There's an ice cream truck antidote, a horror story, camping tales…It's all well-written, and sometimes interesting; but it's definitely not an SF fanzine."

The theme of Issue 6 was "Renegade Culture".

For Issue 7 the theme was "Monstermania", with articles on classic horror films such as Frankenstein, The Bride of Frankenstein, and Bela Lugosi's Dracula.

Joyce Katz previously co-published ODD, and What About Us Grils? in the 1960s, and was sole editor of Potlatch in the 1970s, and Hard Science Tales in the 2000s. With Arnie Katz, she copublished FIAWOL in the 1970s.

Arnie Katz also co-published Focal Point in the 1970s, and in the 2000s Vegas Fandom Weekly.