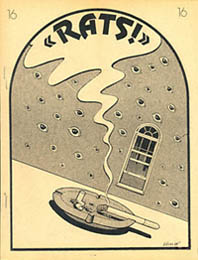 Rats! is a science fiction fanzine by Charlene Komar Kunkel and Bill Kunkel.

Letters came from Ray Nelson and Ted Pauls, among others.

Charlene and Bill Kunkel also published Four Star Extra with Joyce Katz and Arnie Katz, and The two couples published the wrestling magazine The Main Event. Bill Kunkel went on to be a video game developer and journalist, founding the videogame magazine Electronic Games with Arnie Katz and Joyce Worley in 1981 and serving as Executive Editor till 1995. In the 1990s, he and wife Laurie published the fanzine Doodlebug. He later also editing the gaming magazine Tips & Tricks, as well as writing the book, Confessions of a Game Doctor in 2005. He died on September 7, 2011. Charlene Komar Storey became an editor and writer for trade magazines; publisher and editor of a travel newsletter, "Exploring Ireland," with her husband Greg Storey, and a freelance travel and nonfiction writer for newspapers and magazines. She is also a councilwoman in her home town.