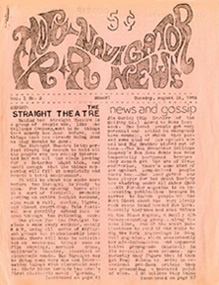 Mojo-Navigator Rock & Roll News was published in San Francisco, California, U.S.A. in the 1960s, and covered the local alternative music scene. Fourteen issues were released between August 1966 and August 1967. It is seen as the precursor to the alternative journalism that followed in its wake, such as Crawdaddy and Rolling Stone.

The first issue was published August 8, 1966. It was a mimeographed newssheet of two pages with concert announcements at the Matrix, Fillmore and Avalon.

Issue 4, August 30, is now four sheets, and is mainly devoted to an interview with the Grateful Dead, plus a feature on Country Joe & The Fish by Greg Shaw.

Issue 5, September 7, is given over to the second half of The Grateful Dead interview, and a response to the SF Oracle's unsympathetic article on the SF rock scene.

Issue 7, September 27 is four sheets, and features an interview with SF DJ Tommy Saunders, and Big Brother & The Holding Co., plus ads for upcoming concerts by Country Joe & The Fish, Takoma, and Freedom Highway.

Issue 9, October 17, is six sheets, and features a Jim Kweskin interview, Dootone Records, new, events, and an original Stanley Mouse handbill announcing The Daily Flash with Country Joe & The Fish at the Avalon, stapled in as last page.

Issue 10, November 8, is nine sheets plus a printed photo cover. It incorporates an two colour Tom Weller handbill for Country Joe & The Fish at the Jabberworck, and a two colour Steve Renick-designed handbill for the 13th Floor Elevators and Moby Grape at the Avalon, and a photo of Jerry Garcia. Also featured was an interview with The Mystery Trend, and news of Bill Graham banning Mojo-Navigator editor Dave Harris from The Fillmore.

Issue 11, November 22, is seven sheets and has part two of The Mystery Trend interview, and an interview with Country Joe & The Fish, who are also on the cover, plus a two colour Tom Weller-designed handbill for the band's upcoming show at the Jabberworck. As well, a photo of Bob Weir, and an Victor Moscoso-designed handill for Country Joe & The Fish, Bug Brother & The Holding Co, and Quicksilver Messenger Service at the Avalon, plus letters about the riot on Sunset Strip, and the differences between the scenes in LA and SF.

Issue 12, December 22, is eight sheets, with a printed photo cover of Ed Saunders, incorporating two Victor Moscoso-designed colour handbills, with The Grateful Dead and Moby Grape at the Avalon, and Country Joe & The Fish at the California Hall. Featured are the conclusions of the Country Joe & The Fish and The Mystery Trends interviews, and the article "The British Blues Scene" by David Harris.

Issue 13, April 1967, is 30 page, black and white printed with cover photo of James Gurley from Big Brother & The Holding Co. Featured is a Blues Magoos interview, reviews by Greg Shaw and Gene Sculatti, editorial on the ris of new rock criticism, Mike Daly on Phil Spector, Rick Griffin psychedelic artwork, incorporating a photo by Gene Anthony of The Grateful Dead.

Issue 14, August 1967, is 38 pages, with cover photo of Jimi Hendrix, and an interview with The Doors, coverage of the Monterey festival, article of Eric Clapton, record reviews, news, and a Tom Weller designed psychedelic ad for Country Joe & The Fish.

Greg Shaw was simultaneously publishing Entmoot, a publication devoted to Tolkien and his writings and the science fiction fanzine Feemwlort. He went on to publish Metanoia with Suzy Shaw in the 1970s, and his best known publication, Bomp!.