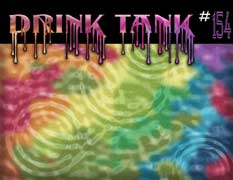 The Drink Tank is a fanzine edited and published on an approximately weekly schedule by Christopher J. Garcia. It focuses on science fiction fandom, sex, weirdness and rock music. The title comes from a typo on a form filing trademark on the name for a film production company in the mid-1990s.

Edited by Chris Garcia, The Drink Tank debuted on eFanzines.com on January 31st, 2005. At first it was a rough zine of five pages. Over the first five months, the zine went from being written primarily by one small group of friends to a more general zine featuring such writers as Steve Green, John Hertz, Jay Lake, M Lloyd (Stacked Decks), Judith Morel, SaBean MoreL, Lloyd Penney (Torus), John Purcell (Askance, In A Prior Lifetime), Jason Schachat, and Frank Wu. It is well-known for featuring art of busty women and strange articles, as well as being poorly proofread.

In 2011, The Drink Tank won the Hugo Award for Best Fanzine.