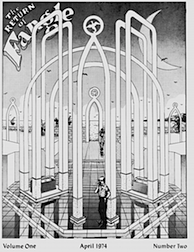 Fangle was a science fiction fanzine by Ross Chamberlain.

Ross Chamberlain was the winner of the 2012 Rotsler Award for achievement in graphic art in amateur publications.