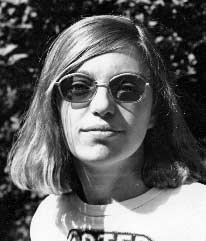 Susan Wood was introduced to sf fandom and fanzines by Richard Labonte, editor of Hugin and Munin, while attending Carleton University in Ottawa, Ontario in the 1960s. After moving to Toronto later in the decade, she began to attend meetings of the Ontario Science Fiction Club, formed in 1966 and hosted by 'Capt'n George' Henderson at his nostalgia store Memory Lane, then at his Whizzband Gallery next door, and then other locations.

She met Mike Glicksohn in 1969 and they were married, and in 1970 she began at first writing for his zine Energumen and then co-editing it. Three years later, in 1973, they won the Hugo Award for 'Best Fanzine'.

At the same time Susan was also publishing her own zine Aspidistra. It ran from 1970 till 1973 with 5 issues being released.

On October 29 of 1973 Susan moved to Regina, Saskatchewan, and began her third fanzine called Amor, shortened from its original name of Amor de Cosmos People's Memorial Quiet-Revolutionary Susanzine: A Personalzine. Sometimes Amor functioned as an update letter to friends, then became a zine again, depending on the purpose Susan wished to put it to, which is perhaps why she referred to Amor as a "Susanzine" rather than a fanzine.

In 1976 she published Queebshot, a one shot homage to Norm Clarke and Georgina Ellis and Boyd Raeburn's fanzine series called Queebshots, with contributions from Norm and Gina, Richard Labonte, Will Straw, and Bob Wood.

In the Spring of 1977, Susan, along with Allyn Cadogan, editor of BCSFAzine, William Gibson and John Park, released the first issue of Genre Plat. The second issue appeared in the Summer of this same year. Once Allyn Cadogan moved to San Franciso the editorial group broke up, although Allyn continued to publish the fanzine and Susan continued to contribute. By the end of 1977, she had again won the Hugo Award for 'Best Fan Writer'.