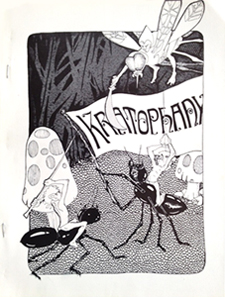 Kratophany was a science fiction zine by Eli Cohen.

The first issue of Kratophany appeared in November 1971. The first few issues were published in New York City, NY, U.S.A. Then Eli Cohen moved to Regina, Saskatchewan, Canada, and then again to Vancounver, British Columbia, where subsequent issues came out. In 1980 he returned to New York to publish issue 13 in 1981, which would be the final issue after a decade of publishing.