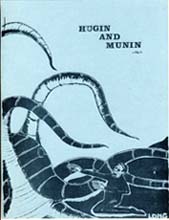 Hugin and Munin is a science fiction fanzine by Richard Labonte.

Hugin and Munin, named for the two ravens of the Norse god Odin, who representing 'thought' (Hugin) and 'memory' (Munin), was published in Ottawa, Ontario, Canada from 1966 to 1968. At least 7 issues appeared.

In the December 1968 issue of Checkpoint, Bryn Fortey writes of issue 6, "This is the first Canadian fanzine I have come across and if you, like me, didn't know such a thing existed, it provides an ideal introduction. Talking about the issue, in his editorial, Richard Labonte says -- "...and it's a showcase of sorts for Canadian fandom." A fair enough comment."

Letters came from Issac Asimov, Alexei Panshin and George W. Price, among others.

In Checkpoint 6/7 from September 1969 (first series), Peter Roberts writes in his review of issue 7, "HaM is a nice fanzine; that's my first thought when considering it for review and I think I'm going to have difficulty clarifying it to any sensible degree -- it's just a feeling that comes up out of its orange pages... "

Hugin and Munin #6 was a split zine with Kevas and Trillium.