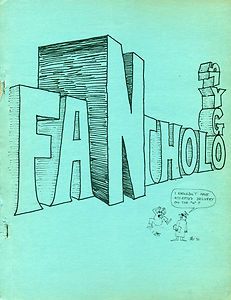 Fanthology 75 is a fan anthology edited and published in 1976 by Bruce D. Arthurs.

Fanthology 75 was a 100 page mimeographed publication released in an edition of 250 copies.

Front cover and interior art is by Alexis Gilliland. The front cover features two fans, one stomping on his propeller beanie while the other is saying, "I shouldn't have accepted delivery on the "n"?"