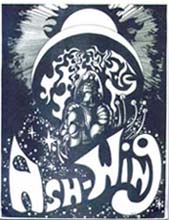 Ash-Wing was a science fiction and fantasy fanzine by Frank Denton.

Ash-Wing heralded from Seattle, Washington, U.S.A. First published in 1968, this title was released for a decade, ending in October, 1978. During that time 24 issues were produced. Ash-Wing regularly published short fiction and poetry.

In Checkpoint 55, Darroll Pardoe said of Ashwing; "A fine genzine, with an excellent cover owl."

Fiction was by David Carew, Randall Larson (Threshold of Fantasy), and Ken St. Andre, among others. Ash-Wing provided the first publication of the story, "My Secret Place" by Lisa Tuttle (Mathom).

Poetry was by Michael Carlson, and Darrell Schweitzer.

Ash-Wing followed Denton's earlier fanzine Hoom, co-published with Bee Bowman. After the end of the run of Ash-Wing Frank Denton published As the Crow Flies, followed by The Rogue Raven.