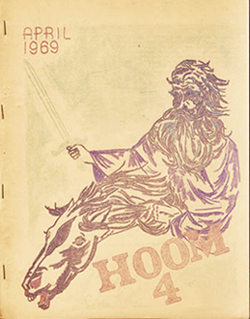 Hoom is a fanzine edited by Bee Bowman and Frank Denton, and published by the Wyver's Cave, Mukilteo and Michel Delving Ferry System Press.

Hoom was devoted to the works of author JRR Tolkien. The editors collaborated over a distance, with Bee Bowman in Waynesboro, Virginia, U.S.A., and Frank Denton in Seattle, Washington, U.S.A. The first issue was published in June 1968, with issue 2 following in September, and issue 3 in December of that same year. Issue 4 appeared in April 1969, and issue 5, the last issue, in Fall 1969. It was distributed through NAPA. Hoom included articles, essays, film and book reviews, fiction, poetry, art work, and letters.