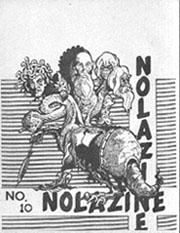 Nolazine was first published in 1967 by Bill Bruce, John Guidry, Don Markstein, and Rick Norwood. In it's long history, there have been many other editors including Patrick Adkins, and Jeff Jones.