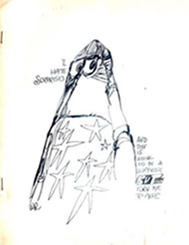 Badmouth
Issue 3 Summer 1971
Cover art by William Rotsler
Caption: "I hate surprises...And this is going to be a surprise BUT turn the page...

Badmouth was a science fiction fanzine by Lynn Hickman.

Contributors of writing included Liz Fishman, and articles on "Censorship" by Lisa Tuttle (Mathom), and "Suburban Gardens" by Gary Zachrich, among others.

Lynn Hickman , with Carole Hickman, had released six issues of TLMA (The Little Monsters of America) from June 1951 till October 1952. Lynn also published The Little Corpuscle, a companion zine to TLMA. In 1953 he merged the two publications into STF Trends. Later in the 1950s, he published JD Argassy until the 1960s, and then Badmouth in the 1970s, followed by The Pulp Era in the 1980s and 1990s.