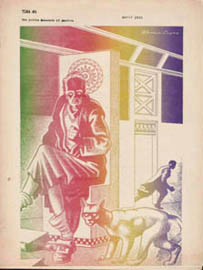 TLMA is a science fiction fanzine by Lynn Hickman (1926-1996) and Carole Hickman.

TLMA stands for "The Little Monsters of America", which was a science fiction club co-founded by Lynne Hickman and Wilkie Connor, with a roster of around 300 members that lasted from 1951 till 1952. TLMA was the official organ.

The club was for people who were stared at "as though (they) were a little monster or something" when they left a newsstand carrying a science fiction magazine. The goal of the club was to promote science fiction and fantasy reading.

It was published in Statesville, North Carolina, U.S.A., in the 1950s. The first issue appeared in June 1951. Issue 3 was published April 1952, with issue 4 following in June. Issue 5 appeared in August with Carole Hickman as co-editor, and 6 appeared in October 1952.

Frequently issues were printed in a spectrum, with the color changing from page to page. Fred Robinson in Straight Up describes Issue 3; "...the latest TLMA is also multi colored, the cover by Clyne (and very neat too) is a spectrum type, pages 3-4 in green, 5 in black, 6-7 in brown and so on."

Basil Wells wrote a regular column called "Thud and Blunder" for each issue, and his short fiction stories were frequently featured as well. Editor Lynn Hickman also published Well's novel, Sons of Thrane, which was available through the fanzine.

Manly Banister wrote "The Dip of the Dowsing Rod", for issue 3, an article about dowsing, or water divining. In his review, Fred Robinson says, "I found it fascinating reading and wholly convincing." In the same issue Richard Elsberry penned "When Fans Collide", his account of the Nolacon.

Lynne Hickman also published The Little Corpuscle, a companion zine to TLMA. Both these titles were merged by Hickman into STF Trends starting in 1953.