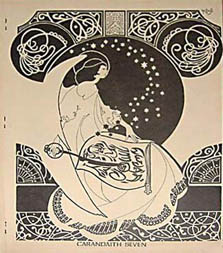 Carandaith is a science fiction and fantasy fanzine edited by Alpajpuri and produced by the Australian Tolkien Society.

Alpajpuri (aka Paul Novitski) was a well known science fiction and fantasy fan artist . He edited his fanzine Carandaith in number of locations, including Vashon, Washington; Eugene, Oregon; and Fairfax, California, U.S.A. The content was largely devoted to JRR Tolkien, but also included articles on science fiction and fantasy fandom. According to David Emerson, writing in Rune #48, ..."Alpajpuri's CARANDAITH and Jay Zaremba 's THE ESSENCE (were) leading the cause of graphic experimentation..."

Issue 1, published July 1968, included a review of the record Poems and Songs of Middle-earth by F. Woods, and articles on aspects of Tolkien's novels, by Alpajpuri, including "The West-Gate Inscription - A Tentative Translation", "The Feanorian Tengwar as Applied to English", and "A Conversion Formula (from the Houghton Mifflin to the Ballentine pb)".

Issue 2, released February 1969, featured an article by Daphne Castell entitled "The Realms of Tolkien', which included extracts from her interview with Tolkien, and "Translation from the Elvish" by Alpajpuri.

Issue 3 included "Can America Kick the Hobbit" by Charles Elliot; "Middle Earth Cosmology: by Philip Hart; "Paradoxes and Inconsistencies in The Hobbit and The Lord of the Rings", by K. Nahigian and D. Moore; and "On Tolkien Fandom", by Cory Panshin (Twilight Zine, The Proper Boskonian).

Issue 5 came out January 1970 and featured a cover illustration by Dan Osterman, and rear cover by John Ingham. It contained "The She-Devil & Dr. Webster", fan fiction by Walter Wentz; and "Bored of the Rings", commentary by Alpajpuri.

Issue 7, published October 1972, was the last issue. It featured a cover by Jim Shull, and included George Barr writing on the importance of fan art; Arnie Katz (FIAWOL) writing on the origin of present day fanzines, and editorials by Alpajpuri.

Letters came from Joy Hill, among others.