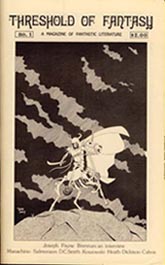 Threshold of Fantasy was a small press publication edited by Randall Larson, and published by Fandom Unlimited Enterprises.

"Doctor Dexter" by Llewellyn Cabos is considered to be integral to the Cthulhu Mythos.

Randall Larson has previously published the fanzine Fandom Unlimited in the 1970s. He is also the author of books on Robert Bloch, and music in horror films, such as Musique Fantastique, and Music from the House of Hammer.