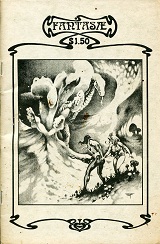 Fantasae was a zine of fantasy-oriented "graphic verse and art" edited by Deborah and Ken Raney in Fort Montgomery, New York, U.S.A.

The first issue was produced in a numbered limited edition of 300 copies, and signed by Ken Raney. Though undated, it appears to have been published in late 1975.