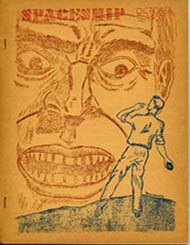 Robert Silverberg began publishing Spaceship in 1949 when he was 15 years old. It ran into the 1950s, and by 1954 Silverberg was celebrating the 5th anniversary with his twenty-fifth issue. By this time he was a member of the Fantasy Amateur Press Association and his zine was included in their mailings.

Spaceship was also a split zine that was combined with other zines such as Wylde Star.

Of note in issue 22 are the four pages by Hal Shapiro devoted to the art of Rosaleen Norton, an Australian fantasy artist whose book had just been banned in the U.S.A. The book is also mentioned in Roger Dard's "Report from Australia", noting that, in Australia, her work was removed from a gallery and the book also banned.