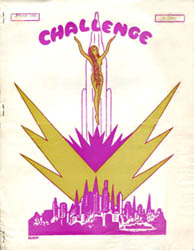 Lilith Lorraine began publishing in the 1940s with The Raven and Different, a periodical mainly devoted to fantastic fiction and poetry, including science fiction. She began to also publish Challenge in the 1950s in Rogers, Arkansas, U.S.A. The subtitle for the publication was "The Poetry of the Atomic Age", and the focus was entirely on science fiction and weird fantasy poetry. Challenge is often credited as the first poetry periodical devoted to a specific genre, though there were significant precursors.

Challenge ran for only four issues (Summer 1950, Fall 1950, Winter 1950, and Spring 1951). It was then absorbed into Lorraine's existing publication Different, and she went on to also publish Flame.