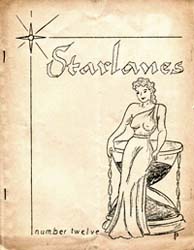 Starlanes, with the subtitle "International Quarterly of Science Fiction Poetry", was published in Ferndale, Michigan, U.S.A. from January 1951 to December 1961. 40 issues were released.