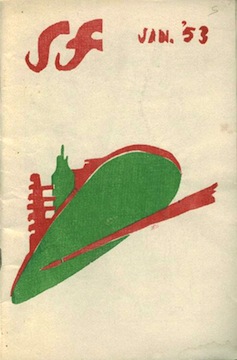 SF was published by the Hopeful Young People's Extra-Radical Society for the Promotion of Amiable Conditions Everywhere (HYPERSPACE) in Silver Spring, Maryland, U.S.A. in the 1950s. The first issue appeared in September 1952, with #2 in October, #3 in November, and #4 in December of that same year. Issue 5 was released in January 1953, #6 in February-March, #7 in June, and #8 in December 1953. The title of the fanzine was then changed to Vamp for issue #9, and Varioso for issue 10. He continued to release Varioso till 1958, with 18 issues published.

John Magnus was a member of the Baltimore SF Forum, hosted by Marian Oaks (The Femizine) in the late 1950s. The group, which included John Hitchcock, Raleigh Multog, Ted Pauls, George Wetzel, and Ted White (Zip, Stellar, Void), met monthly till around 1962.