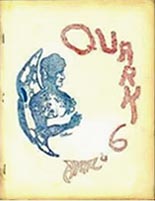 Quark is a science fiction fanzine published by Lesleigh Couch and Chris Couch in the 1960s.

Quark was published in St. Louis, Missouri, U.S.A. While it was a science fiction fanzine, it also became well known for its coverage of the rock music scene of the era as well.

Quark was distributed by the Southern Fandom Press Alliance.

Lesleigh Couch went on to co-publish Starling with Hank Luttrell.