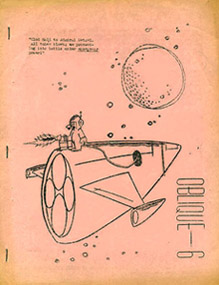 Oblique was a science fiction fanzine by Cliff Gould.

Eight issues of Oblique were published between 1955 and 1956.

Poetry was contributed by Jan Sadler (SLANder), among others.

A notable contribution was the first publishing of the Philip K. Dick essay "Pessimism in Science Fiction", published in issue 6, December 1955.