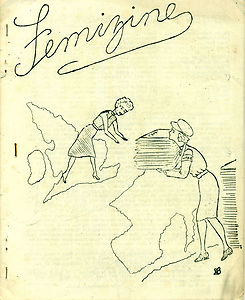 Femizine is a science fiction fanzine from the UK.

Femizine was begun in the 1950s. It was supposedly edited by non-existing fan “Joan W. Carr” who, in reality, was a hoax created by male fan H.P. “Sandy” Sanderson. As a sergeant in the British Army stationed in North Africa, Sanderson was far enough away from UK fans to invent a meeting with a female sergeant also serving in Africa who‘d expressed an interest in fandom. “She“ was soon writing to various fans back in England and, at a time when there were few female fans, was asked, and agreed, to edit Femizine, which became a focal point for 'femme fannes' in the UK. When the hoax was finally revealed early in 1956, it shocked many fans. However, the fanzine was taken over first by Pamela Bulmer and then later by Ethel Lindsay, who continued to publish issues.

Issue #2 was published in Summer 1954 and co-edited by H.P. Sandy Sanderson as "Joan Carr", and Ethel Lindsay.

Issue #8 of March 1956 was the first issue to be edited solely by Pamela Bulmer, while H.P. Sanderson faded into the background.

InTHEN Volume 2, Chapter 3, Rob Hansen writes about issue #9; "...in May the ninth issue of FEMIZINE duly appeared with 'HOAX' emblazoned across its cover over a drawing of a deceased Joan Carr. Inside, Sanderson, Evans, Lindsay, and Bulmer laid out the whole hoax for a shocked British fandom. People had been so completely taken in that they were stunned by the revelation and immediate reactions to it were muted."

Rob Hansen continues, "In September 1958, Ethel Lindsay re-launched FEMIZINE under the name DISTAFF. The fanzine was welcomed by Britain's female fans but the name-change wasn't, so with its next issue, the eleventh, it reverted to its old name."

Femizine 15, released in 1960, was the last issue Ethel Lindsay edited. Ron Bennett, in Skyrack of October 1960, write in his review, "FEMIZINE 15 With this issue of the all-femmefan fanzine FEZ, Ethel, who has had a hard time soliciting material of a high enough standard to ensure her own enthusiasm, has decided to retire from the editorial chair. This issue ties up the loose strings with a number of interesting letters but also contains an article on women in fandom by Daphne Buckmaster and an outstandingly worthwhile article by Joyce Slater."

In concluding the story of Femizine, Rob Hansen writes, "Lindsay published FEMIZINE, which continued to be a showcase for the talents of female fans, until its fifteenth and final issue in September 1960."