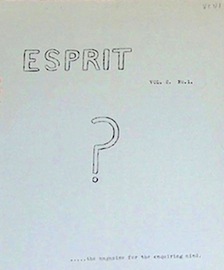 Esprit was a science fiction zine by Daphne Buckmaster.

Esprit was first published in London, England in 1954 and later in Kirkdudbright, Scotland in the early 1960s. It was originally intended for circulation in the Offtrails Magazine Publishers Association (OMPA) but with the 13th issue in 1960 she decided to make it generally available. Daphne Buckmaster stated her intentions were: "...an attempt at the sort of fanzine which I have long waited to see but have never come across - a magazine in which observations, experiences and ideas can be exchanged."

Vol. 1, No. 1 contained articles on selling and status seeking by Ron and Daphne Buckmaster, and an item on infinite horizons by Sid Birchby.

Contents of Vol. 2, No. 2, October 1960, included the articles "The Future of SF" by John Rackham; "History is NOT Bunk" by Nan Gerding (Nandu, The Chigger Patch of Fandom, Starlanes); "Fandom and SF", by Bill Gray; "Psychosomatics" by Jack Wilson; and "How are Your Perceptions?" by Daphne Buckmaster.

Vol 2, #3, included the articles "An Open Letter" by Brian Aldiss; "Today's Students" by Nan Gerding; "An Experience of Solitude" by Ray Nelson; "Was It Telepathy" by Jim Norrie; "Interference" by John Rackham; as well as contributions by Les Gerber and Harry Turner (Now & Then, Zenith).

Vol. 2, # 4 included the articles "See What You Think" by John Rackham, writing on drugs; "The Sands of Time" by Art Rapp (Spacewarp), on Indian relics; "On With The Rat Race" by Julian Parr, on status seeking; "At The Mercy of the Machine" by Nan Gerding, taking a stand against IBM testing; "Talking of Solitude" by Ray Nelson; as well as contributions by Max Cranium, and Don Smith.

Letters came from D.R. Smith, among others.

Esprit was voted one of the top ten fanzines in the UK in the Skyrack Fan Poll for the years 1960 and 1961.