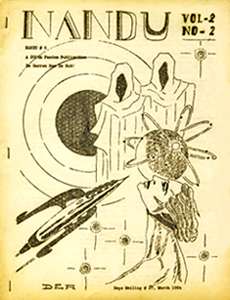 Nandu was a science fiction and fantasy zine edited and published by Nan Gerding in Roseville, Illinois, U.S.A.

The first issue appeared in December 1952. At least 29 issues were published, the 29th coming out in January 1965. Nandu was an Apazine, distributed by the Spectator Amateur Press Society (SAPS).

Issue 7 featured a tipped in real photograph of Nancy Share at her mimeograph machine.