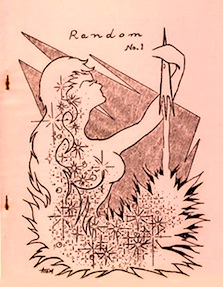 Random is a science fiction fanzine by Daphne Buckmaster.

The first issue of Random was published in September 1960 in Kirkcudbright, Scotland.

Issue two followed in March 1961, and consisted of the editor's thoughts on the roles of women in science fiction fandom and in society at large, She argues for a meaningful role for women in the world.

The third, and last, issue was published in June 1961. Random was an apazine, and was sent out as part of the Offtrails Magazine Publishers Association and also distributed on its own.

Cover artwork was contributed by Arthur Thomson (ATOM) for issue 1, and John Rackham for issue 3.