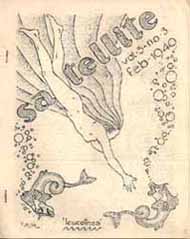 The Satellite was a science fiction fanzine published by John F. Burke of Liverpool, England.

The first three issues were co-edited with David McIlwain (later known as Charles Eric Maine), the first issue appearing in October of 1938, after which 17 issues were released, the last appearing in August of 1940.

The Satellite began life as the official publication of the Liverpool Science Fiction Association, which had come into being in July 1938. After three modest issues it developed into a more sophisticated publication and at the London Convention of the SCA on the 21st of May, 1939, it was selected as the new official publication, after the former fanzine, Novae Terrae, ceased publishing.

Satellite later merged with The Fantast and John Burke co-edited that publication for a time.