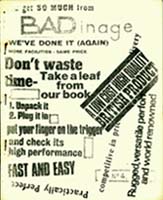 Badinage was released in the UK in the 1960's. The first issue appeared in February 1967, with two more issues following that year. Issues 4 was published in March 1968 and the fifth and final issue in July 1968.

Badinage began life as the club zine for the Bristol and District SF Club (BaD) in the UK. The first issue appeared in February 1967, and, as Richard Lynch describes in "Fandom In The 60s", "featured a letter column filled with letters from fans who had been persuaded to comment on the non-existent issue number zero."

Artwork was contributed by Moy Read and Tony Walsh.

In 1999, Greg Pickersgill wrote of Badinage, "The first ‘real’ fanzine I saw from beginning to end, parts of it still enchant me, parts now seem appallingly ill-written and well deserving of the negative criticism such as T E White heaped upon it at the time. But still, in a way it’s one of the things that pops into my mind when I hear the word ‘fanzine’."

A special issue of Badinage was part of the Thirdmancon Combozine (April 1968), which also included special issues of Gothique, Scottishe, and Speculation.