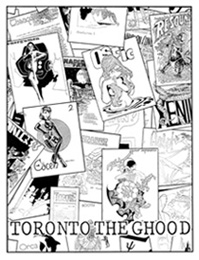 Toronto the Ghood was a one issue only anthology of writing from Toronto fanzines edited by Taral Wayne.

Toronto the Ghood was published in Toronto, Ontario, Canada, and was released for the first Ditto Convention held in Toronto in 1988. Mimeography was done by Mike Glicksohn. The anthology was dedicated to the memories of Leslie Croutch, editor of Light; Bill Grant, editor of Canadian Fandom; P. Howard Lyons, editor of Ibidem; and Susan Wood, editor of Aspidistra, Energumen, Amor, and Genre Plat.