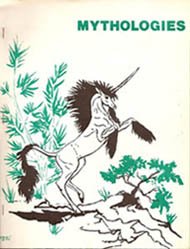 Mythologies was a science fiction and fantasy fanzine by Don D'Ammassa.

Mythologies began in 1974 as a dittoed fanzine. By the fourth issue it was being produced by mimeograph. The last issue #19, was published in 1986.

Featured each issue was a column by Paul Di Filippo called "Arrant Nonsense".