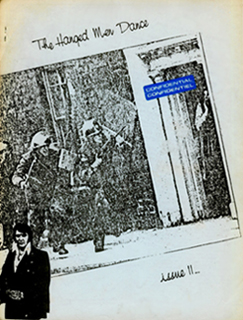 The Hanged Men Dance was a punk and literary fanzine by Jim Shedden and Sara Bellum Heinonen.

The Hanged Men Dance was published in Scarborough, Ontario, Canada in the 1980s. At least two issues appeared. The second issue was a split zine with Black Triangle, published in 1985.

On the blog Taddle Creek, the article "Growing Up In Toronto" features editors Jim Shedden and Sara Heinonen. Jim Shedden writes, "My friend Lisa Godfrey started a zine in high school and I kind of nudged my way in. It was called This Tiny Donkey Looks Rather Lost, which was a caption in a kids’ book. There were two issues before Lisa moved on, and then I changed the name to The Hanged Men Dance, from a poem by Rimbaud. And then Sara joined, and that was really welcome for several reasons, because doing it alone was a drag...We were trying to create a culture that didn’t really exist in front of us, and we were trying to create connections, which of course is easy to do now, with the Web." Sara Heinonen continues, "We also wanted to bring to light bands and discussions that weren’t happening in the regular media. There was all this new music we were hearing, sometimes, on the radio, but no one in the media was talking about it otherwise...We all wanted to do something creative. It wasn’t all about music either. The other thing about the fanzine and the culture was there were no rules."

Contributions of articles included "How I Spent My Summer Vacation And Other Stories" by Sara Bellum; "Richard Hell - Christ Symbol?" by David Keyes; "Not Just Another Pretty Face, or Charles Bukowski: A Swell Guy" by Elliot Lefko; "Waylon's Wailin'" by Lisa Shedden; and "Ignorance Speaks Loudly Through Words" by Taral Wayne.

Reviews were by John Curry, Electrolux Delux, k., and Motor City Max. Bands such as The Raincoats were profiled.

Interviews were with Dave Howard, and Caroline Azar and G.B. Jones, the editors of Hide zine and members of the band Fifth Column.

Jim Shedden also published the comics zine Gratis and the science fiction zine This Sure As Hell Ain't DNQ, and was co-editor of This Tiny Donkey Looks Rather Lost.