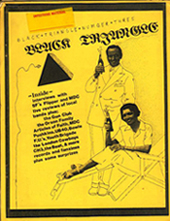 Issue four was a split zine with The Hanged Men Dance. This issue featured an interview with Toronto band The Polkaholics; reviews of Toronto bands Burning Ring, Raving Mojos, Jumpin' Kangas, Three Blue Eyes, and Hype; and a short article by John Crawford entitled "The Baboon Expose 9-11-83", about how the father of the owner of I.R.S. Records is the Assistant Deputy Director of the C.I.A. Contributors for this issue were John Crawford, Graham, Jim Shedden, Arnold Layne, and Steve.

Jim Shedden also published the comics zine Gratis and the science fiction zine This Sure As Hell Ain't DNQ, and was co-editor of The Hanged Men Dance and This Tiny Donkey Looks Rather Lost.