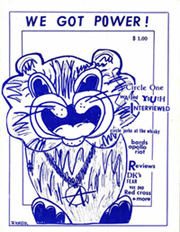 We Got Power
Issue One
Cover art by Jennifer Schwartz

We Got Power was a zine by Dave Markey, Jennifer Schwartz, Jordan Schwartz and Kim Pilkington.

We Got Power was published in the 1980s in Los Angeles, California. It was begun by bored suburban teens Alan Gilbert and Dave Markey, who named the zine after a song called "I Got Power" by the band Negative Trend. Gilbert left to go to college and Markey took over the editorship of the zine. Jennifer Schwartz did the cover drawing for issue one, and her and her brother became more involved.

Aside from band interviews and photos, the zine featured puzzles, jokes, reviews and scene gossip related from a tongue-in cheek position. and The zine was printed on glossy paper and featured day-glo colored ink. Five issues of the zine were released between the years 1981 and 1983.

Dave Markey was in the band Sin 34 and also wrote "Scene Reports" on the California punk scene for Maximum Rock 'N' Roll during this time. He later went on the make films, with the same name for his film company, We Got Power Films, as he once had for his zine.

One of the first We Got Power productions was Desperate Teenage Lovedolls, a punk rock film about the rise and fall of the all-girl band The Love Dolls, which starred all the editors of We Got Power, as well as various band members from groups featured in the zine, such as Redd Kross, and their music.