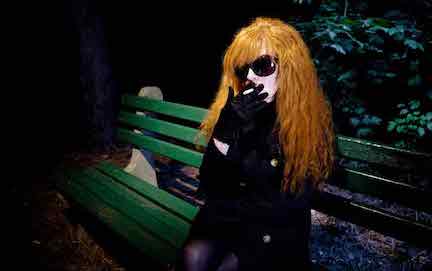 In the 1980s, G.B. Jones started working with editors Caroline Azar and Candy in helping to put out Hide, a combination music cassette compilation and photocopied fanzine, several of the cassette tapes including songs by the band Fifth Column, of which she and Caroline Azar were both members. The fanzine documented the punk, experiemental, and industrial music scene of the period, and included articles, photos and interviews in the fanzine on music, movies and art. Five issues were published.

J.D.s, her next zine, was co-published with Bruce LaBruce and ran for eight issues. The first issue of this publication appeared in 1985, the intitials 'J.D.s' standing for 'Juvenile Delinquents'. The two editors wrote a manifesto which appeared in Maximum Rock N Roll in February 1989. The effect of the manifesto, and J.D.s itself, was widespread, setting off an explosion of like-minded zines. The editors also released a cassette compilation tape, called the J.D.s Top Ten Tape, featuring bands from the U.S.A., Canada, New Zealand, and the UK, and held J.D.s film nights in London, Toronto, Montreal and San Francisco in 1990.

After the demise of J.D.s in 1991, G.B., along with Jena von Brucker, Caroline Azar, Johnny Noxzema and Rex released the often contentious zine Double Bill, referred to as an 'anti-zine' or, more frequently, a 'hate zine' (as opposed to 'fanzine'), a new category in the self publishing world. Five issues were produced between 1991 and 2001. The editors contributed to the zine Girl Germs. As well, G.B. and Jena were interviewed by Alarm Clock, and the zine was written about in The Village Voice, and SF Weekly, among other publications.

G.B. has directed, and appeared, in a number of films and videos, and was a contributor to the film zine created by Miranda July called Joanie4Jackie. Her movies have all been made on Super 8. The Troublemakers premiered in 1990 and proved influential. Her next film was The Yo-Yo Gang, released in 1992, a 30 minute 'exploitation' movie about girl gangs that has gained cult film status. The film features a number of zine editors, such as Donna Dresch, Deke Nihilson, Caroline Azar, and the other members of G.B.'s band Fifth Column. Her most recent production is "The Lollipop Generation", a feature film that, like her previous movies, stars many zine editors including Jena von Brucker, Vaginal Davis, Joel Gibb, Jen Smith, Johnny Noxzema, Scott Treleaven, Anonymous Boy, Gary Fembot and Stevec Bones.

G.B. is well-known for her drawings. In 1996, a gallery in New York released the book G.B. Jones, containing drawings and other artwork from J.D.s, Double Bill, and other zines, with commentary by Dodie Bellamy, Kevin Killian, Dennis Cooper, Jeffery Kennedy, Vaginal Davis, and others. Although readily available in the U.S. and Europe, copies were seized at the Canadian border and it was pronounced "Banned In Canada".

Her work can be seen in the pages of the dozens of zines she has contributed to, including Every Reason, Trash Compactor, F.O.D.! Maggotzine, Girl Germs, The Kingsboro Press, Sugar Needle and This Is The Salivation Army, or been featured in, such as Femme Flicke, Making Waves, Urban Legends, and Colouring Outside The Lines, from throughout the U.S., Canada, Europe and Australia.