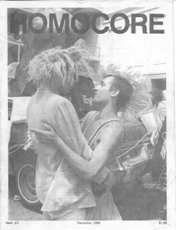 Deke Nihilson is a zine editor, musician, actor and activist.

Deke's first zine was called Pavement of Surface, begun in the mid eighties. Five issues were released and, for a time, it ran concurrently with his next zine, Homocore.

Deke and co-editor Tom Jennings began publishing Homocore zine in San Francisco in 1988. Released just a few years after J.D.s, and borrowing its name from that zine, it was one of the earliest queercore zines and helped expand the queer punk scene. The editors also set up Homocore shows with bands like Fugazi, M.D.C. and Beat Happening and did much to popularize the queercore scene on the west coast of the U.S.. Deke began his own band around this time, called Comrades In Arms; one of the first queercore bands, they played at Homocore shows and Gilman St., and released one cassette.

Around this time, Deke appeared in two films; The Yo-Yo Gang by G.B. Jones, released in 1992, and Shred of Sex by Greta Snider, the editor of Mudflap zine. As well, Deke worked with Food Not Bombs and was involved with Industrial Workers of the World, the IWW. On September 1 of 1992, Nihilson attended a press conference for four workers who had been fired from the gay bar 'End Up'. They had joined the IWW in the midst of ongoing labor disputes with the bar, prior to their dismissal. During the conference, Nihilson burned the rainbow flag, a gesture designed to refute the supposed unity the flag symbolizes for the gay communtity. The event was featured in San Francisco media such as the Bay Times, Bay Guardian and Bay Area Reporter.

After Homocore ceased publishing in 1991, Deke began another zine with his bandmate Clay Cadic, called Three Dollar Bill. The zine covered everything from queercore to indepth political articles to spirituality. Issue three was retitled "Riot Gear" and covered the blossoming Riot Grrrl movement. At this time the band broke up and only one last issue, with the original title, and Deke as sole editor, was released in 1992. Since then Deke has not published another zine.