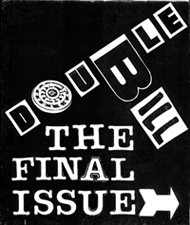 Devoted to actor William Conrad, star of Cannon, Jake and the Fatman and Nero Wolfe, as well as narrator of Rocky and Bullwinkle, Double Bill was often referred to as a 'hatezine' (as opposed to 'fan'-zine), or sometimes as an 'anti-zine', introducing a new category into the the self-publishing world. 'This was because Double Bill compares two well-known Bills: fat actor William Conrad, whose size was frequently important to his roles in film and on television, to too-thin William Burroughs, misogynist wife killer and pederast. Burroughs invariably comes up short.

Five issues of this cut and paste zine were published from its headquarters in Toronto, Canada, during its run from 1991 till 2001. The zine was nominated for a Trillium Award in 1992, and was the subject of several articles in magazines such as The Village Voice, usually provoking angry letters to the editor in response. The editors of Double Bill collectively contributed to the zine Girl Germs, and were interviewed in the zine Alarm Clock.

A limited edition of issue three was released in a disposable diaper, a reference to Burroughs' supposed problem with incontinence. One constant feature of the zine were the letters Double Bill received and although the editors stated they only printed letters from 'celebrities', these letters were frequently from fellow zine editors. Contributors included Anonymous Boy, Vaginal Davis (Shrimp), Gary Fembot (Fembot), Kevin Joy (Zines Are Stupid), Jeffery Kennedy, Robert Kirby, Lois Maffeo, Bart Plantenga, Lisa Suckdog (Rollerderby), Scott Treleaven (This Is The Salivation Army), and many others. The final issue, published in 2001, featured testimonials from a range of musicians, writers and zine editors on the legacy of Double Bill.