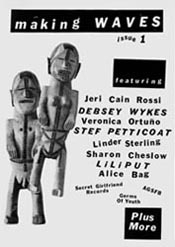 Making Waves was born during discussions between editors Camille, and Mary. The zine takes its name from a compilation featuring women's bands from the UK. In their own words, the editors, "aim to explore the intersections of punk, feminism and womanhood."