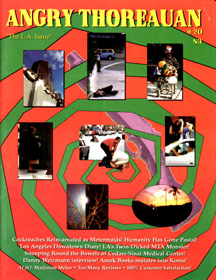 Angry Thoreauan is a defunct zine from Los Angeles by way of Orange County, CA, that published approximately 25 issues betweeen 1990 and 2001.

Before Angry Thoreauan there was a former rag, reproduced via photo-static machines and fueled by confusion as well as cheap beer, titled Happy Thrasher. (HT was started in 1987 and was soon beaten into shape with such bruises as to require a name change after having suffered fourteen issues.)

AT and HT were published by the ever-vocal Rev. Randall Tin-Ear, a fixture in the zine community throughout the 1990s. A large, well-produced zine what was nearly the size of Flipside and Maximum Rock 'N' Roll, Angry Thoreauan was brimming over with a plethora of entertaining rants, stories, interviews, punk rock and more.

For a such a large fanzine, it was, surprisingly, done almost exclusively by the publisher, who described himself as "a perpetually inebriated bastard," whose personality was the glue that held it together through his stories. Tales included aspects of his struggles with drug and alcohol abuse. Tin-Ear wrote for as well as helped produce loads of Los Angeles-based publications that were broad in scope; from Flipside, to Hit List, to Working World, to Discover Hollywood!, to Ben Is Dead, to the L.A. Cacophony Society, to books by the former Mike Davis student Michael Jacob Rochlin (URM Studio).

In late 2001 after the death of his fiance, Tin-Ear relocated to New York.

Angry Thoreauan is featured in Volume Six of the Zine Yearbook.