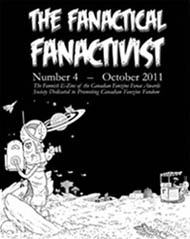 The Fanatical Fantactivist is a science fiction fanzine by R. Graeme Cameron.

The Fanatical Fanactivist is published in British Columbia, Canada, and available as an e-zine as eFanzines.com. The subtitle of the fanzine is, "The Fannish E-Zine of the Canadian Fanzine Fanac Awards Society Dedicated to Promoting Canadian Fanzine Fandom".

The award recipients for 2011, the first year of the awards, were chosen by Cameron. Best Fan Artist was Taral Wayne; Best FanWriter was Garth Spencer; Bext Loc Hack was Lloyd Penney; Best Fanzine was Warp, edited by Cathy Palmer-Lister; and Life-Time Achievement Award went to "The Unknown Faned" who published The Canadian Science Fiction Fan in 1936. The Awards were present at VCon in Vancouver, British Columbia. The cover of issue 4 by Taral Wayne featured a reproduction of the certificate given to the winners. Eric Cjhu designed an award, featured on the cover of issue 5, which Lawrence Prime will create.