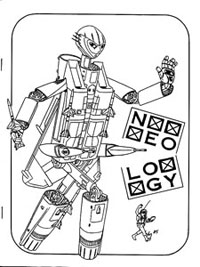 Neology was a science fiction fanzine published by the Edmonton Science Fiction and Comic Arts Society.

Neology was a quarterly club zine published in Edmonton, Alberta, Canada on behalf of the Edmonton SF and Comic Arts Society.

The first issue appeared in 1976 as a four page dittoed newletter, under the title ESFACAS Newsletter, edited by David Vereshagin. By 1978, the title had been changed to Neology, and the editor switched to mimeograph reproduction. Approximately 74 issues were released up until 1992.

Under the editorship of Catherine Girczyc, Neology won the Aurora Award for Best Fanzine in 1991.

Catherine Girczyc has won two Aurora Awards, receiving her second Award for her work as host of the radio show The Ether Patrol. She also writes short ficiton, poetry and screenplays, and has written episodes for the television shows Cybersix and Sci-Squad Cadet.