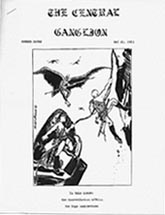 The Central Ganglion
Issue 7 May 1983

Emerging from Victoria, British Columbia, Canada in the Spring of 1982, The Central Ganglion was conceived of by the editors as an interclub newsletter. The editors, calling themselves '"The Ganglion of Four", hoped to improve communications between Victoria's four or five warring clubs and factions.

Robert Runté wrote, " It was one of Canada's better club newsletters, especially considering it didn't actually have its own club."

The fanzine ran for approximately 11 issues, with the last issue appearing in November of 1983.

David Gordon MacDonald was also a co-editor of Atavachron.

Garth Spencer was also publishing The Maple Leaf Rag at the same time as The Central Ganglion.