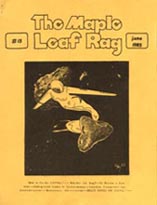 The Maple Leaf Rag was a science fiction fanzine by Garth Spencer.

The Maple Leaf Rag was published in Victoria, British Columbia, Canada, from 1983 till 1987, with 30 issues appearing during that time. It was a newszine that reported on Canadian SF clubs, conventions, and controversies. Also featured was news on zines and small press writers market news. It was published every 6 weeks.

After the 30th issue in 1987, Spencer passed editorship on to Michael Skeet, who published 14 more issues under the title MLR from 1987 to 1990 in Toronto, Ontario.

Letters came from Lari Davidson (Potboiler), and Steve George, among others.

The Maple Leaf Rag was the winner of the first Aurora Award for Best Fanzine.

Garth Spencer was also one of the co-publishers of The Central Ganglion during 1982-1983. He had previously published the zines Scuttlebutt and The World According to Garth. After The Maple Leaf Rag ended in 1987, he returned to fanzine publishing with The Royal Swiss Navy Gazette in 1997 and, in 2000, the BCSFAzine, till 2009.