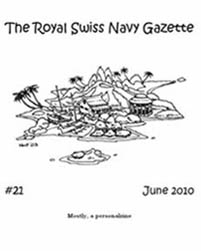 The Royal Swiss Navy Gazette is a science fiction fanzine by Garth Spencer.

The Royal Swiss Navy Gazette is published in Vancouver, British Columbia, Canada. The first issue appeard in 1997. 21 issues have been published. It is Garth Spencer's personal zine, although articles and essays do appear as well, along with letters of comment.

Photos were contributed by Felicity Walker, and Sharry Wilson.

The Royal Swiss Navy Gazette won the Aurora Award for Best Fanzine for 2006.

Garth Spencer previously co-published The Central Ganglion from 1982-1983 and then, on his own, published The Maple Leaf Rag from 1983 till 1987. In the 2000s he also edited BCSFAzine for the British Columbia Science Fiction Association. In the 2010s he began publishing a new zine, or renamed his zine, One Swell Foop.