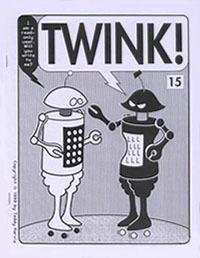 Twink is a science fiction fanzine by E. B. Frohvet.

Twink was released in the 1990s from Ellicot City, Maryland, U.S.A., and ran until June 2003. 30 issues were published during that time. It was originally mimeographed but eventually the editor switched to photocopying. The main focus of the fanzine was "on science fiction, fantasy and fandom".

E.B. Frohvet was, as put in the pages of Ansible, a "famously pseudonymous publisher". In the January 2001 issue of File 770, Mike Glyer devoted his editorial to Frohvet, writing, "When Frohvet first appeared, the grapevine promised he was a hoax being carried on by several fans." Although he used a pseudonym under which he published, he asserted in letters of comment that he was not hiding a 'true identity'. Despite his assurances, it was all a little controversial in fandom for awhile. E.B. Frohvet had managed to inject an element of excitement back into the world of fanzines.

Ted White's review of Twink ends with the remark, "Twink reminds me of the fanzines I used to get in my first years in fandom, half a century ago. Maybe it's nostalgia on my part, but I'm glad there's still a fanzine like Twink being produced today."