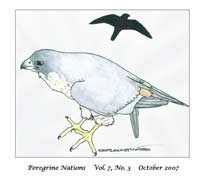 Peregrine Nations was a science fiction fanzine by Janine Stinson.

Janine Stinson released the first issue of her fanzine in April 2001 from Big Pine Key, Florida, U.S.A. and, after 2004, from East Lake, Michigan, U.S.A. The title was based on the word 'peregrination', which is defined by the New Webster Dictionary as, "a traveling, roaming, or wandering about: a journey".

Janine Stinson had previously co-edited The National Fantasy Fan for the years 2000-2001. She went on to co-edit Steam Engine Time with Bruce Gillespie.