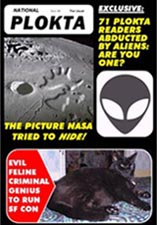 Plokta is a science fiction fanzine, first published in 1996.

Subtitled "The journal of superfluous technology" the magazine includes articles (largely unrelated to science fiction), photographs, illustrations and cartoons. Plokta is well-known for it's humorous covers that often parody various parts of popular culture. The name Plokta is taken from the humorous acronym for "Press Lots Of Keys To Abort", a technique for stopping computer program execution when one doesn't know the proper procedure to do so.