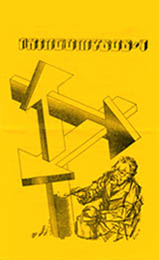 Thingumybob was a fanzine by Chuck Connor.

Thingumybob was published in the 1990s in the UK. In was a 'gen' zine, in other words 'general interest', although most of the contributors came from the science fiction fanzine scene. The first issue was released in 1991, and the last issue, #15, in 1996.

Contributions of poetry came from Dail Chaffin, among others.

Letters came from Charles Broerman, among others.

Reviewing issue 15 of Thingumybob, Andy Hooper writes in Apparatchik #74 of February 1997, "We haven't seen anything from Sildan House for a while, so I'm glad to get this new issue of T-Bob. Chuck has always fancied himself a fringe-fan, with interests that only obliquely intersect with fandom, and this issue serves to underline that attitude more than ever."