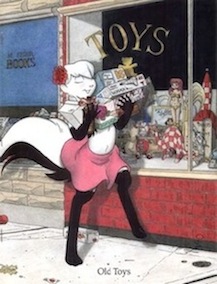 Old Toys is a science fiction collection of the fan writings of Taral Wayne.

Old Toys, subtitled "A Taralable Collection", was published in Toronto, Ontario, Canada in 2002 by Murray Moore, editor of Aztec Blue. It was mimeographed by Catherine Crocket, co-editor of Carefully Sedated, and Colin Hinz, who rebuilt a Gestetner duplicating machine for this purpose.

It featured introductions by Mike Glicksohn, co-editor of Energumen and Xenium, and Moshe Feder.

All illustrations were by Taral Wayne.